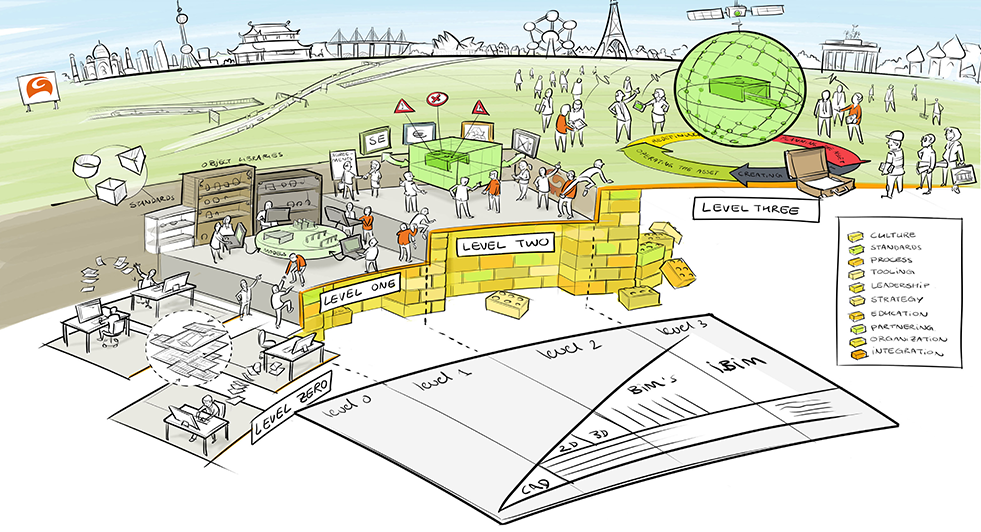 In 2011 the UK government set out an ambitious mandate.

The mandate required all centrally procured building projects to adopt “fully collaborative 3D BIM” by 2016. In doing so the government cemented the UK’s position as a world leader in BIM and put the concept of digital construction at the forefront of the industry’s mind.

As a client, it is believed that the UK government could derive significant improvements in cost, value and asset performance through the adoption of BIM. More specifically through the use of open sharable asset information, and working practices focused on producing, exchanging and using data in more efficient and meaningful ways.

A Consistent Set of Standards

As a caveat to the UK governments self-interests it is hoped that the mandate will lead to rest of the industry following suit, gradually developing towards also adopting Level 2 BIM as a minimum on projects beyond the realm of those that are centrally procured.

In order for the mandate to come to fruition though it was recognised that stakeholders would need to work from the same consistent set of standards in order to deliver the benefits of what BIM can offer. PAS 1192-2, a framework made up of a series of documents, was created to fast-track the introduction of consistent BIM standards within the industry.

PAS, or publicly available specification, is a fast-track type of standard and unlike a British Standard can be rolled out within a relatively short timeframe. As opposed to a British Standard, which takes much longer, a PAS can be introduced within as little time as 9 months.

At the centre of PAS 1192-2, or to give its full name – specification for information management for the capital/delivery phase of construction projects using building information modelling – is BS1192.

BS1192 is a British Standard that has been around for some time, first published in 1998, it sets out “best practice method for the development, organisation and management of production information”.

A clear reflection of the role PAS 1192-2 has played in shaping collaborative working through BIM and the leading role the UK has played in BIM adoption, BS EN ISO 19650-2 required no change in UK policy thanks to the fact the international standard is based on PAS1192-2. Instead the only major was in terminology.