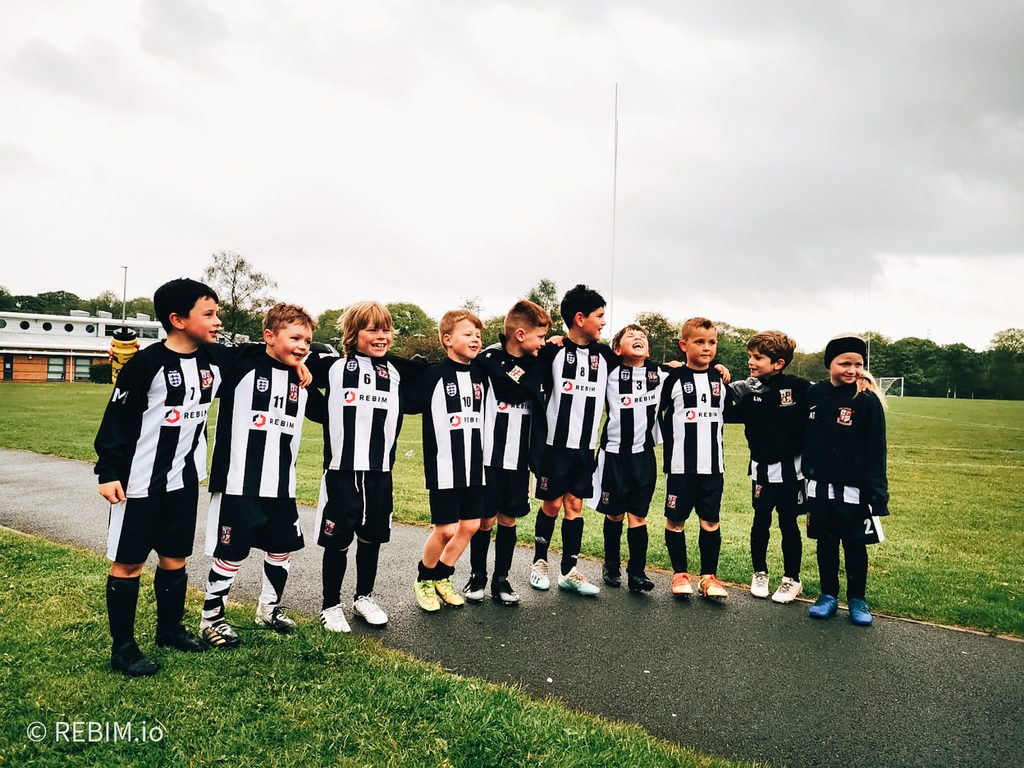 How Does The REBIM Team Help In The Community?

I am sure any football fan around the world would be delighted with a 9-2 cup victory!

The dream became a reality for the REBIM sponsored Walshaw Wolves Under 9’s Team on Saturday as they advanced through to the final of a local football competition with a 9-2 semi-final win.

The team manager is our very own Commercial Director, Gary Peace and he had this to say, “It’s fantastic to get through to the final with such a strong performance and also to have the support from the REBIM team from the start of the season. The kids absolutely love playing football and it’s great to know we have the support of the best in the business!”

What better way to give back to our local community than helping a team of young superstars achieve their dreams?

Even the rain did not dampen spirits on Saturday, with a spectacular and much deserved with for the team.

The FA Cup Final is always a momentous occasion in any football fan’s calendar. Whilst it may not end in victory for some, for fans of The REBIM Team, hopes still remain very high for their final.

In which, everyone at REBIM, wish the team all the luck as we cheer them on to glory!

Spending a year in lockdown has seen community spirit thrive, with people coming together in many ways to make this time more bearable. To see local companies and people with ideas giving back has been heartwarming. This maybe a time we wish to forget, however there are still many positives to be taken from the last year.

Sponsoring a local football team was a very easy decision for REBIM. A sport enjoyed by everyone at the company, we fully understand dreams and visions can become reality.

We officially unveiled the new team kit last year over on our FACEBOOK page. Hopefully all the positive vibes being sent their way will lead them to victory in the final. Another 9-2 scoreline unfortunately cannot be guaranteed! However, why not keep up to date with the team’s progress over on Facebook. Hopefully the next image will be alongside the league trophy!

GOOD LUCK TO WALSHAW WOLVES UNDER 9’S FROM THE REBIM TEAM!

This website uses cookies to improve your experience while you navigate through the website. Out of these, the cookies that are categorized as necessary are stored on your browser as they are essential for the working of basic functionalities of the website. We also use third-party cookies that help us analyze and understand how you use this website. These cookies will be stored in your browser only with your consent. You also have the option to opt-out of these cookies. But opting out of some of these cookies may affect your browsing experience.
Necessary Always Enabled
Necessary cookies are absolutely essential for the website to function properly. These cookies ensure basic functionalities and security features of the website, anonymously.
Functional
Functional cookies help to perform certain functionalities like sharing the content of the website on social media platforms, collect feedbacks, and other third-party features.
Performance
Performance cookies are used to understand and analyze the key performance indexes of the website which helps in delivering a better user experience for the visitors.
Analytics
Analytical cookies are used to understand how visitors interact with the website. These cookies help provide information on metrics the number of visitors, bounce rate, traffic source, etc.
Advertisement
Advertisement cookies are used to provide visitors with relevant ads and marketing campaigns. These cookies track visitors across websites and collect information to provide customized ads.
Others
Other uncategorized cookies are those that are being analyzed and have not been classified into a category as yet.
SAVE & ACCEPT